Photography of astronomical objects brings many problems as compared to the photography as most people know. The exposure times can be very long (even minutes) and the lenses, or telescopes used, often characterize with big focal lengths (hundreds to thousands of millimeters), while because of Earth's rotation (and not only), the celestial objects have to be tracked during the exposure. The quality of tracking, the optics (including aperture of the optical system), the imaging sensor (dynamic range, noise level, ...), the ambient temperature, wind, atmosphere's turbulences, thin clouds, light pollution, etc., that all makes astrophotography difficult.

What is more, there are the same problems as in the "daylight" photography. One of them is the high dynamic range of many of the photographed objects - comets, nebulae, galaxies, crescent Moon, partial lunar or total solar eclipses. All of these are hard to be photographed in a single shot. Because of long exposure times and high ISO gain that are often used, it is worth to take many photos and stack (average) them. That is one of the ways to dramatically increase the dynamic range - by making the SNR (signal to noise ratio) higher. Further dynamic range boost requires merging photographs taken at different exposure times. Having an image with elevated dynamic range, you still need to compress it (apply tone mapping) in order to make all the details visible on a screen, or a print. 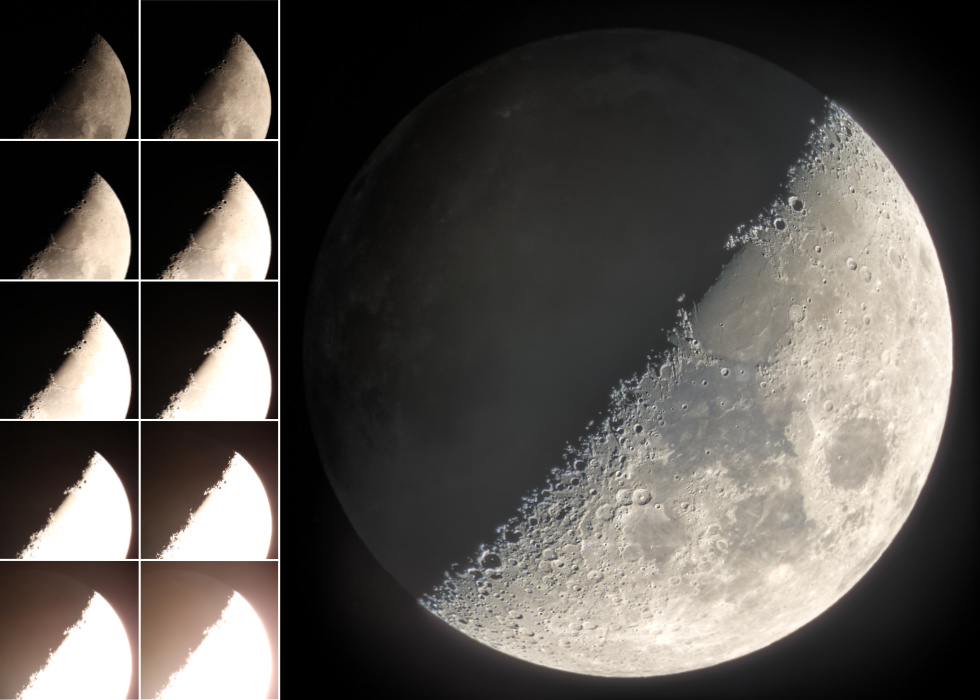 A tone mapped HDR photo of a half Moon. Visible are both the earthshine and the sunlit lunar surface. This kind of photo cannot be taken without using HDR techniques because of very high luminance ratio. The photo has been processed with easyHDR of a series of 12 photos taken at exposure times ranging from 1/400 sec up to 5 sec (at constant ISO 200). Two shortest exposures are not shown. 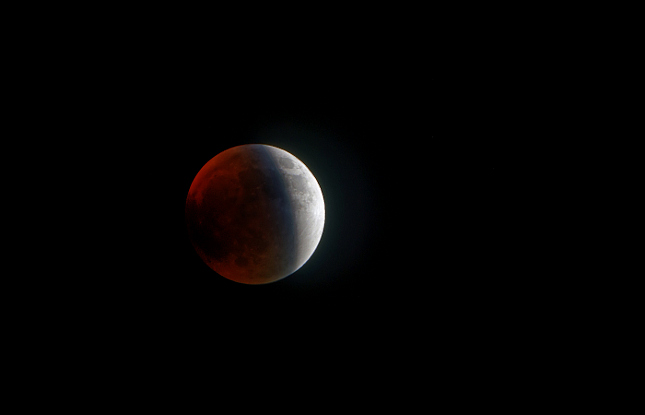 
One of the examples is the Orion Nebula (M42). It is very difficult or impossible to take a photo with properly exposed core as well as the outer fine detail. The sample photos, shown below, were taken by Luke Bellani with Meade DSI Pro 2 astrophotography camera attached to Skywatcher ED80 telescope. The photos were taken at 4, 15, 60 and 340 seconds of exposure. EasyHDR directly imported the FITS image format (that is used by the camera to store image data) along with the exposure parameters, which were used to calculate the exposure values, necessary for true HDR radiance map generation. 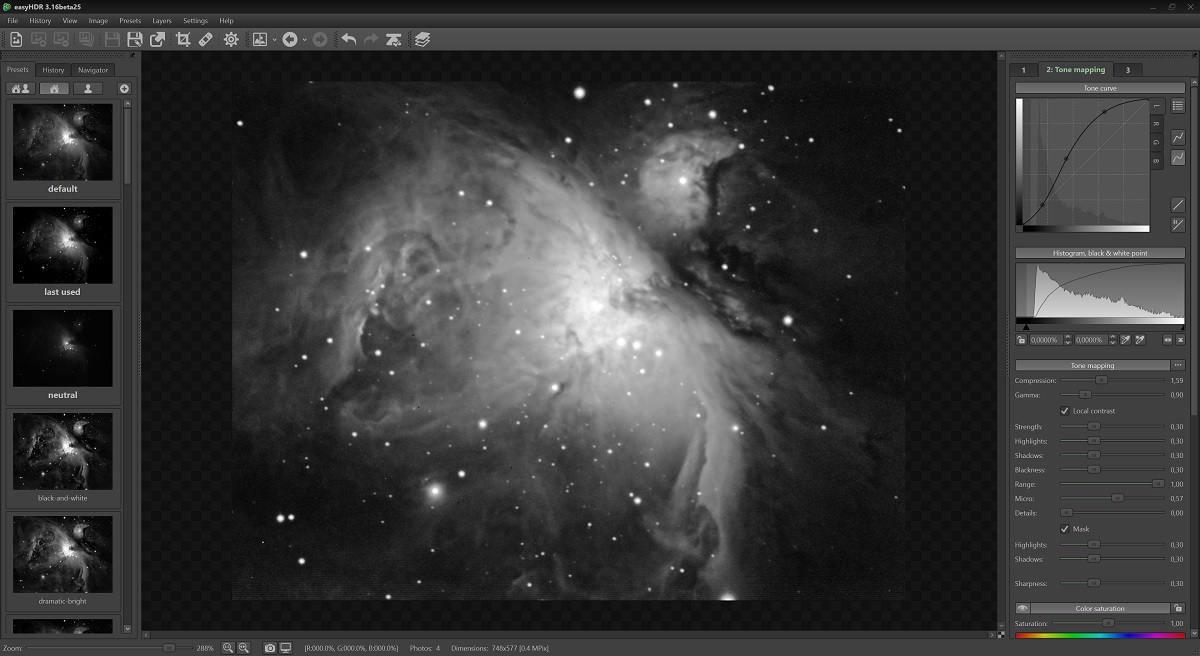 Another example is the Horsehead nebula (IC434), also in the constellation of Orion. Vincent Steinmetz, the author of the photograph, used a professional astrophotography camera to take twenty 10 minute exposures that were stacked together. The photos were taken under dark skies through a H-alpha narrow-band filter. That kind of filter blocks all light wavelengths, passing just a narrow window around Hydrogen-alpha emission line. The resulting stack, stored in FITS image format was directly loaded into easyHDR and tone mapped. The stack has a very wide dynamic range due to high quality of the single exposures taken by the camera, that was further increased by averaging the noise. There was no need to vary the exposure time with this setup and this particular object. EasyHDR's job was to boost fine details in the hydrogen clouds of the nebula, while not overexposing the brightest details.

The stacked, high dynamic range image has been "exposed" twice, by stretching the histogram to preserve the most of the highlights (image to the left) and to bring some details from the darkness (image to the right). In the middle, the result achieved with easyHDR is shown.

Zoomed in to show that stretching the histogram is not enough. It either causes details in the lights, or darks to be lost. The local contrast tone mapping applied by easyHDR can bring the fine details, while keeping the lights. 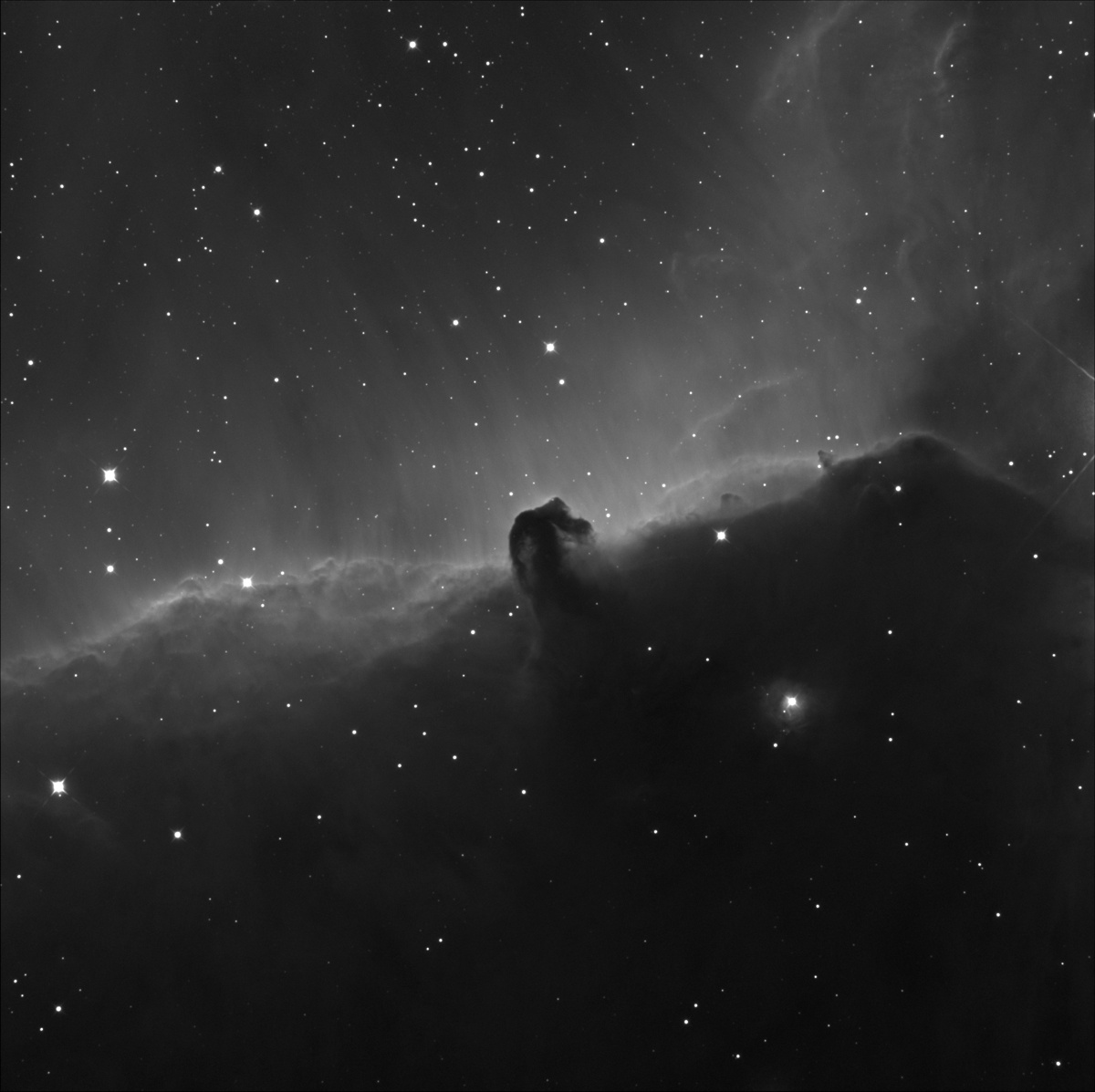 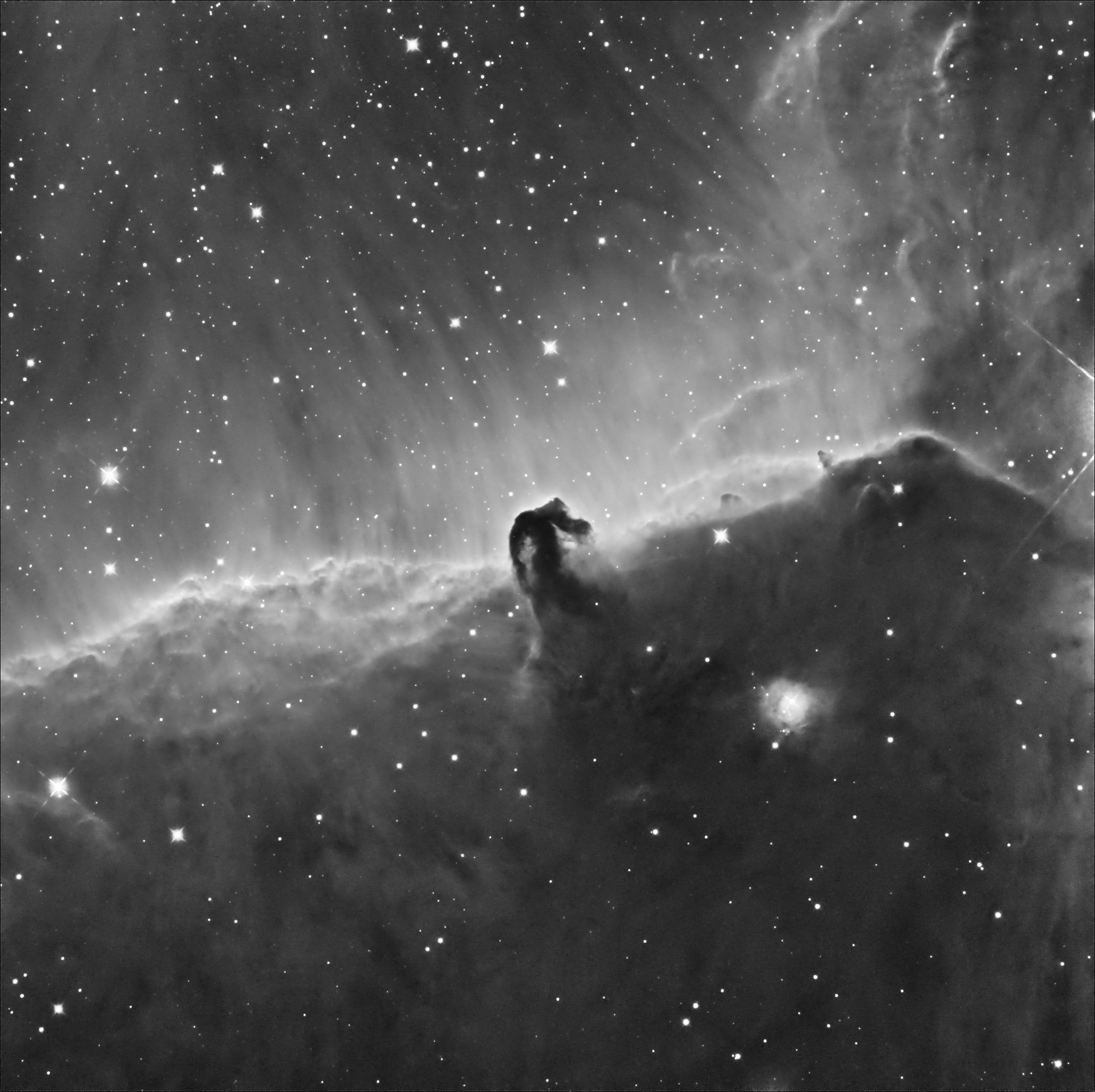 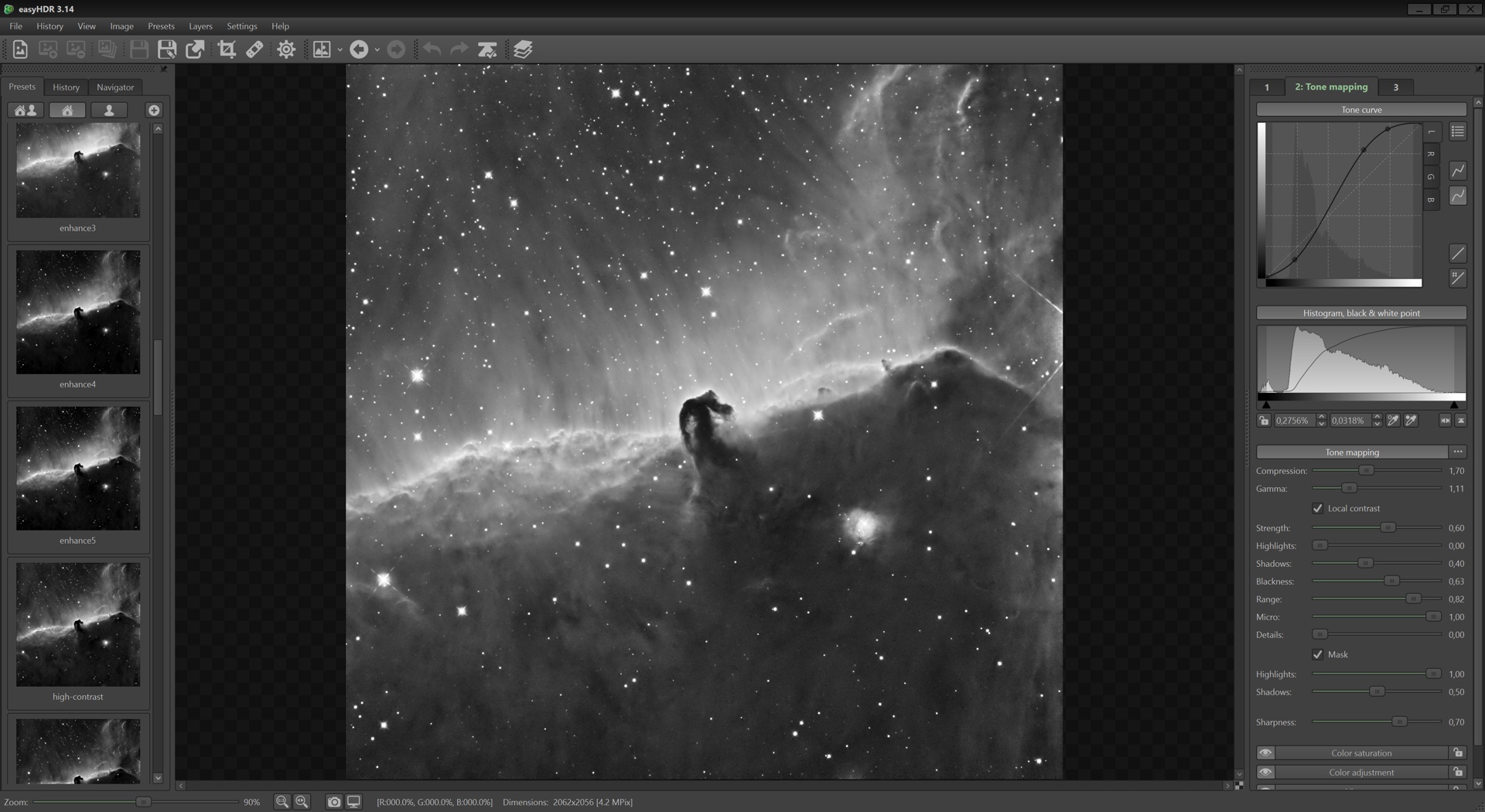 The original photo had a very narrow histogram. To help easyHDR better use it's local contrast algorithm, one pre-processing step was added. The image was first loaded and just the gamma was increased (neutral preset + gamma boost). The result was saved as 16-bit TIFF and re-loaded. Then noise filtering was applied at the LDR enhancement step. Most of the tone mapping presets do clip the histogram a bit (for example 0.2% of brightest pixels are clipped to white), which in case of deep-sky photos may be too much actually. Therefore one of the most important parameters to adjust is lowering the clip margin (in the example above: 0.0318%).

Stacking is a powerful technique that can greatly reduce the noise on the image and allow stronger tone mapping that brings forward finest details. You can use specialized software for registering and stacking of the photos into 16 or 32-bit TIFF or FITS format (like Deep Sky Stacker), then load it into easyHDR for tone mapping. However easyHDR version 3.16 and above is also capable of HDR merging or stacking many RAWs and FITs images, providing white balancing, noise filtering as well as dark frame and flat field calibration.

The following sample photo of the North America Nebula in Cygnus is a stack of 41 RAW photos taken with astro-mod Canon 650D (IR filter removed), with additional UHC filter installed (cuts out some light pollution, passing through mostly Hydrogen-alpha and Oxygen-III light), the lens was Samyang 135mm @ f2.0 and the camera was guided with Star Adventurer Mini star tracker. Each photo was a 30 sec exposure at ISO 3200. EasyHDR imported the RAWs and corrected the white balance, dark frame and flat field (supported since easyHDR version 3.16). The photos were auto aligned and the merged result was tone mapped. Some additional post processing was done with Affinity Photo (secondary curve adjustment and further noise filtering). 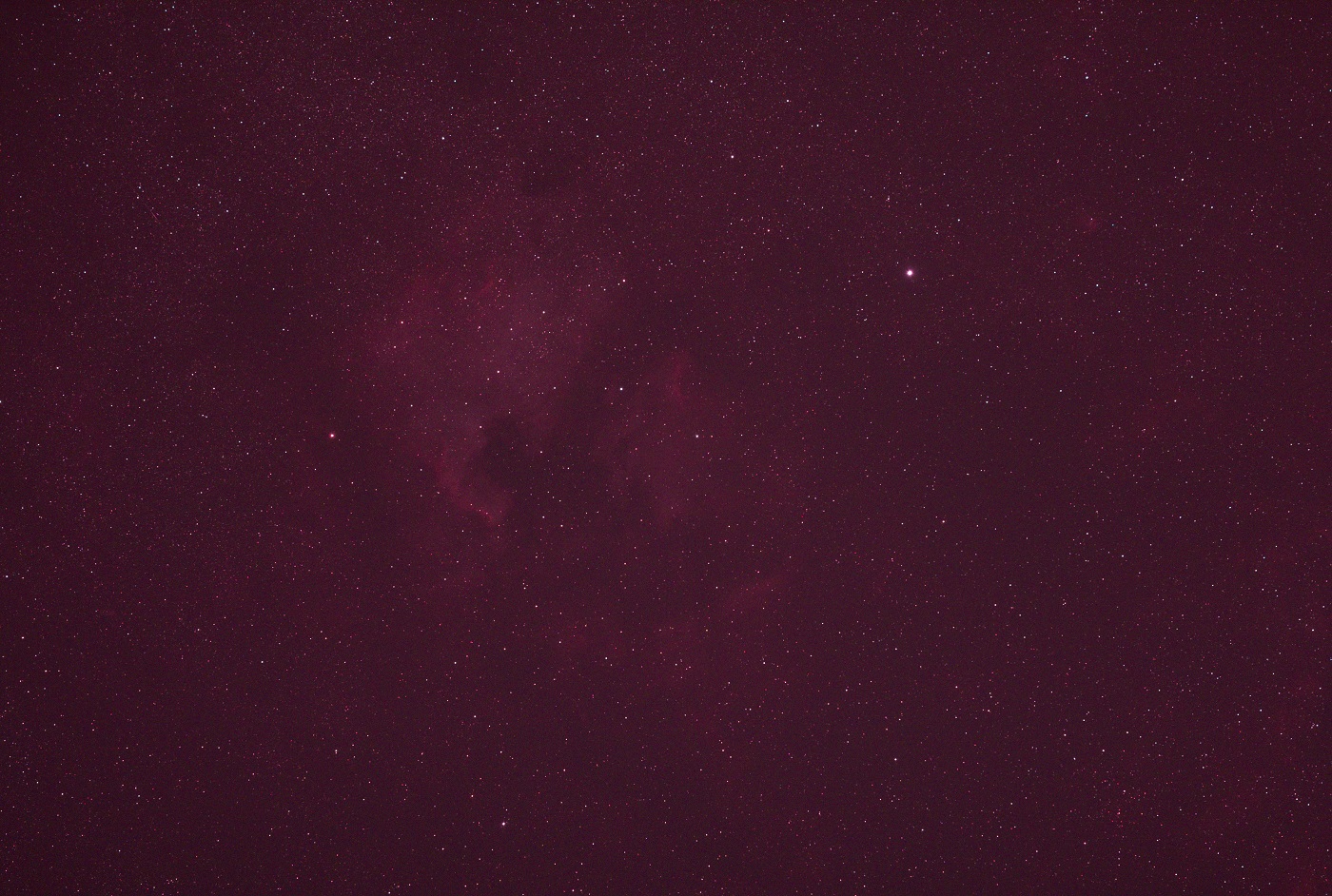 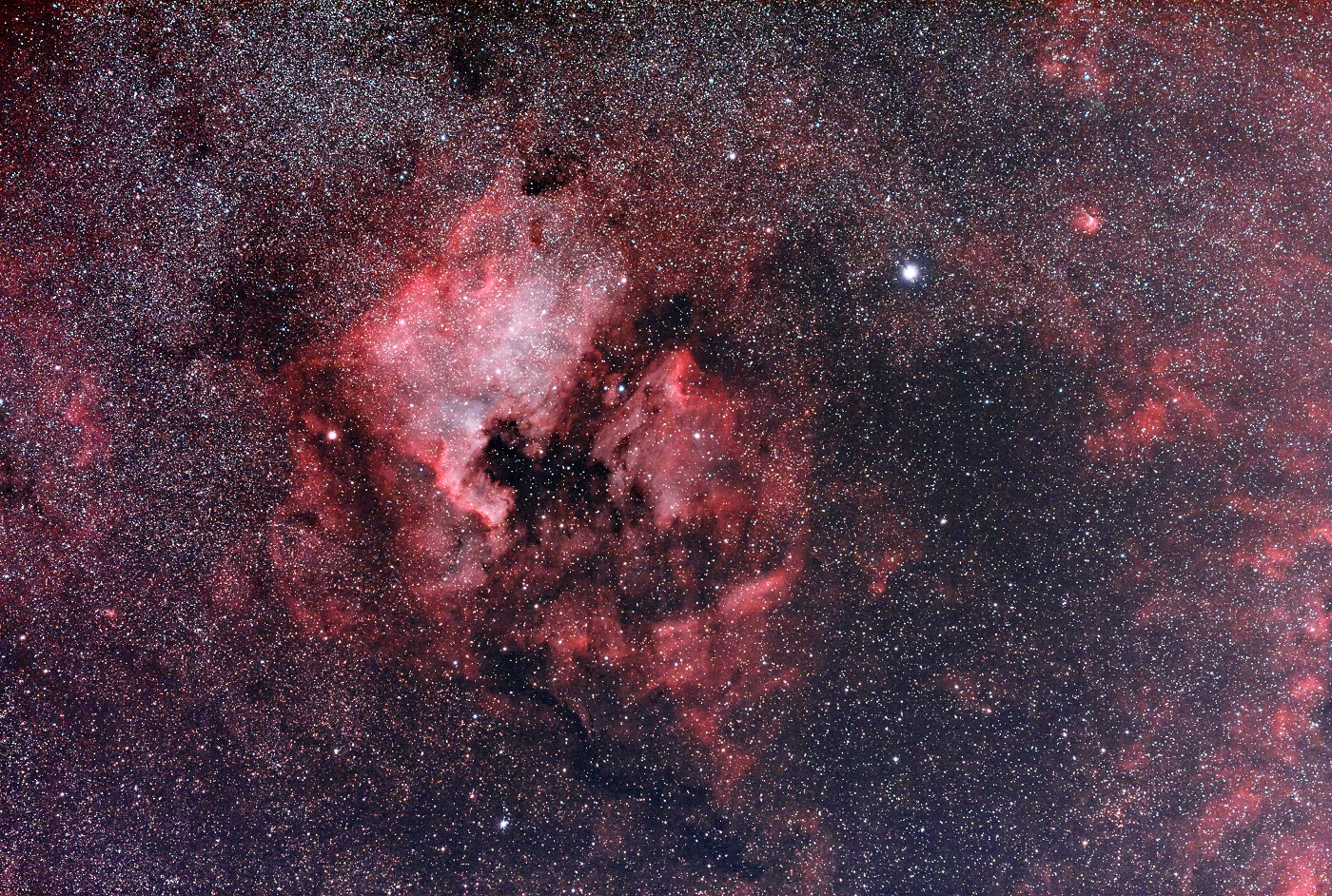 41 guided photos stacked and tone mapped with easyHDR. Comparing a single photo with the final result.

The Deep Sky Stacker software was not able to align the following photo of the M57 nebula taken under suburban sky with a b&w camera (ZWO ASI178MM) with LRGB filters. It was because of too high noise and too small number of good quality stars. EasyHDR was used to load the input photos - each of the LRGB channels was a separate stack of 40 individual input photos in 16 bit FITS format. The dark frame was also subtracted by easyHDR. Then, the individual channels were "processed" with neutral settings and stored in 16 bit TIFF format for further combining into the LRGB composite with Affinity Photo software. EasyHDR was later used again with the color image to slightly boost the local contrasts. As you can see the photo could be much better if all inputs were as sharp as the sample single frame used here for comparison (problems with atmospheric seeing and focus). Also, there should be more photos taken at longer exposure. 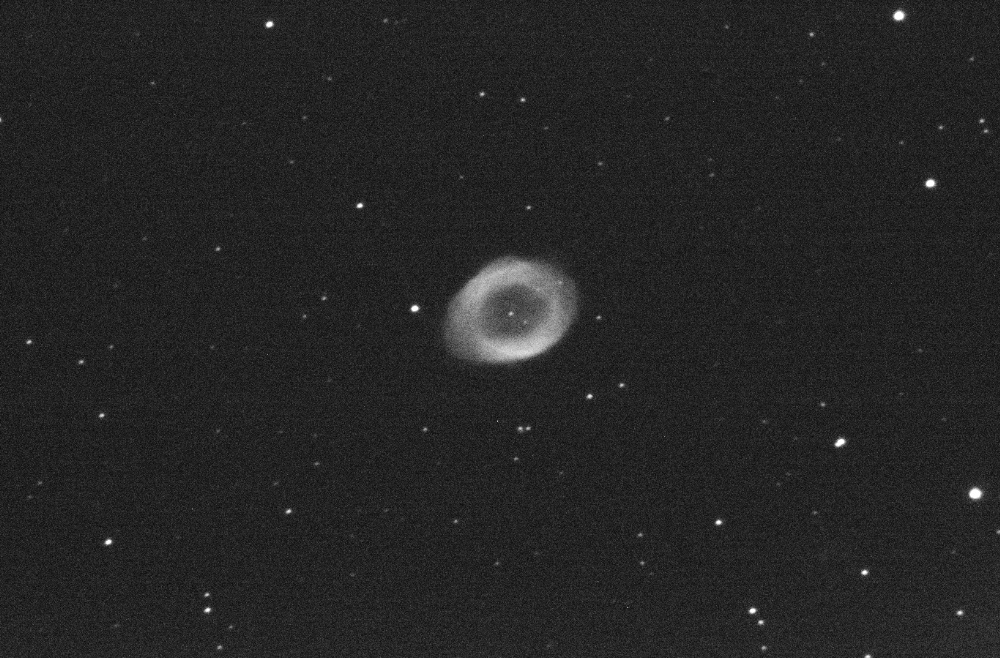 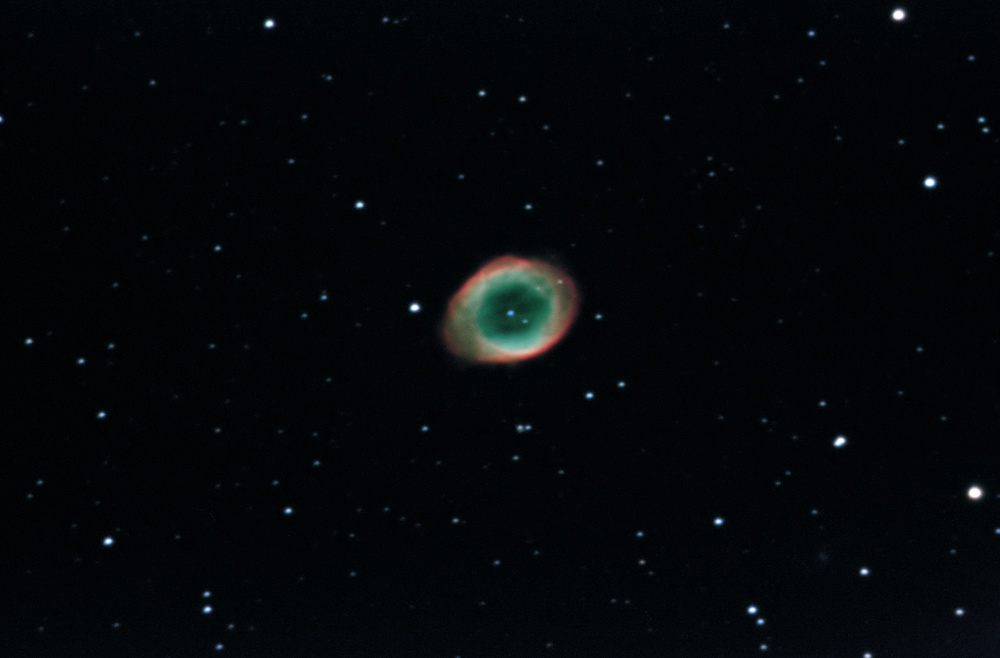 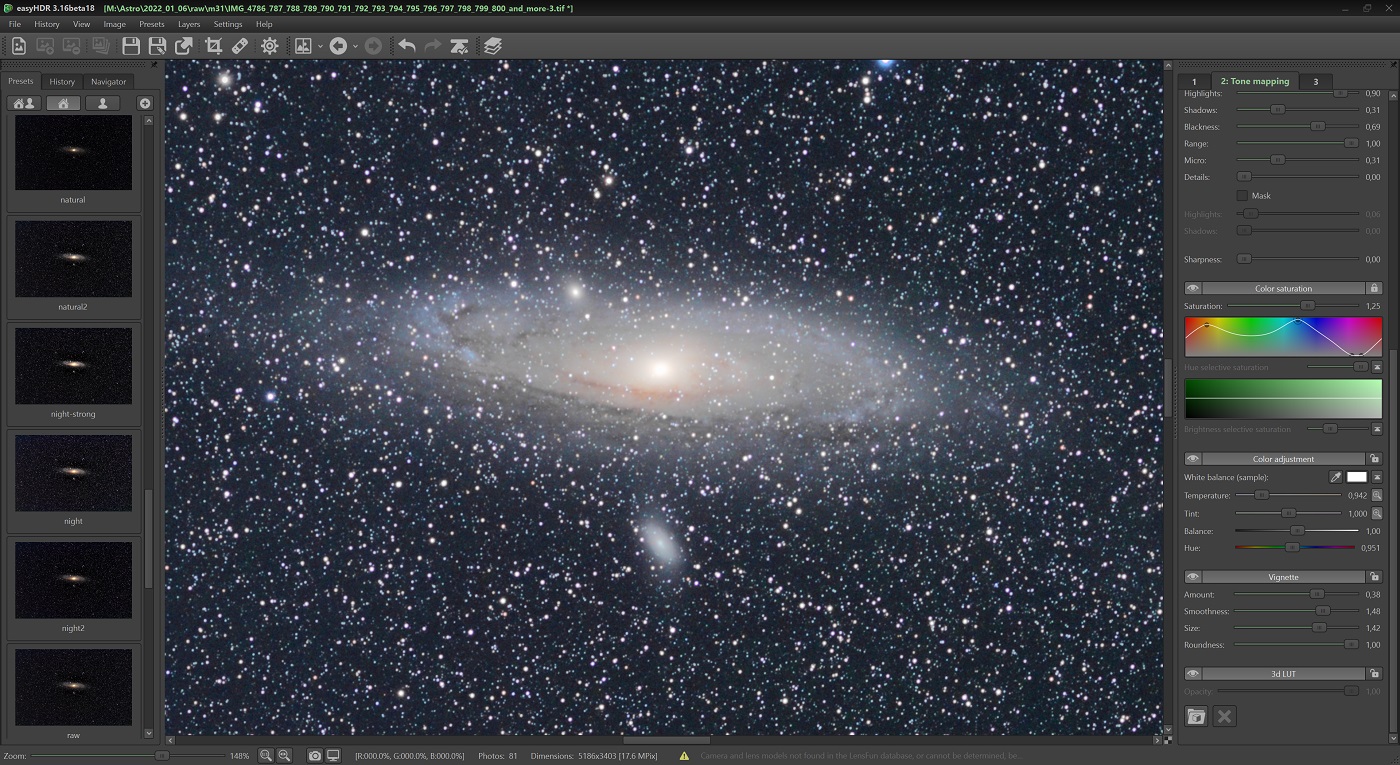 Back to the main documentation page